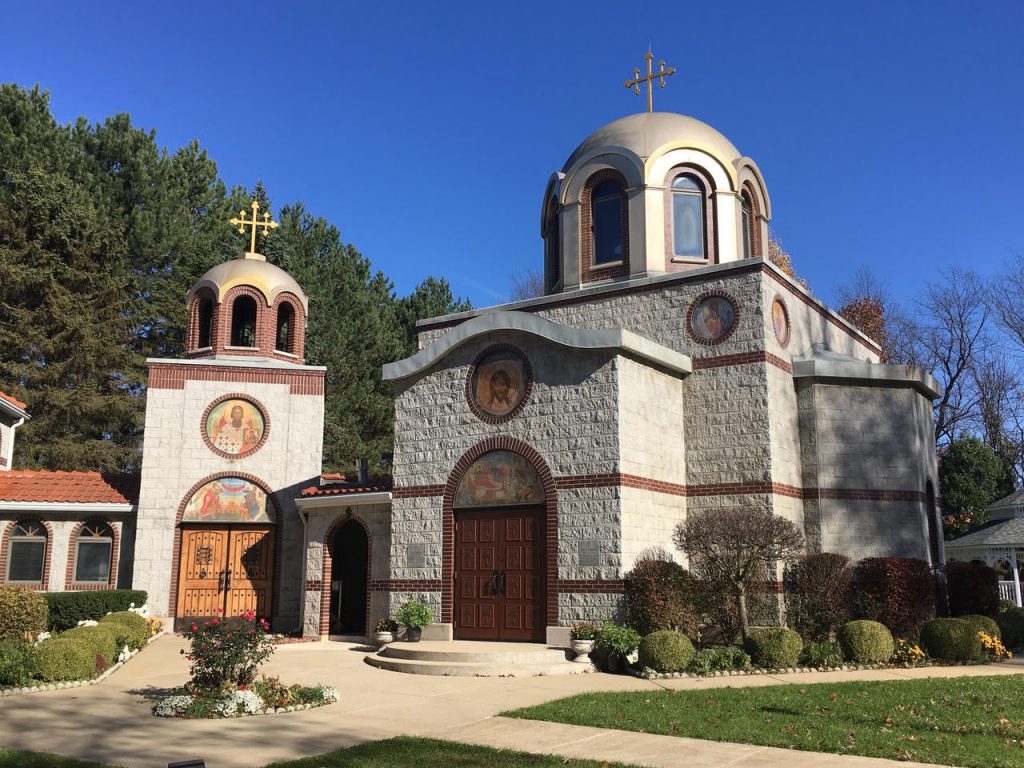 Nestled in the rolling hills of northwestern Indiana, far away from the noise and bustle of big cities, on a spacious piece of wooded land that resembles the fertile regions of Shumadija, lies the Serbian Orthodox Monastery of the Nativity of the Mother of God.

Although the monastery was built and consecrated in 1994, the idea of a Serbian monastery in America was conceived much earlier and was beyond any doubt guided by the Will of God. It was a reflection and the realization of a long-time wish of Mother Evpraksija (Paunovic), who later became the first abbess of the monastery. Together with hieromonk Gabriel and sisters Paraskeva and Antonina, and with the blessing of His Grace Bishop Mitrophan, Mother Evpraksija searched for a way to establish a monastic community in North America that would reflect the way of life of such holy places as Zhicha, Studenica and Ljubostinja, and other old Serbian monasteries.

The funds for building the monastery came as a gift from God: Mrs. Olga Popov, a devout Russian woman and a great friend of the Serbian people left the sisterhood a substantial amount of money for the monastery building fund. By Divine Providence, the monastery never lacked benefactors and donors. Mrs. Biljana Djelevic left the house to the monastery as a gift, and Father Theodore Jurewicz painted the interior of the church with frescoes. His work was a gift to the monastery and the costs of the materials he used were covered by Serbian and Greek donors. Several years later, also with the help of donors, the property adjacent to the monastery was purchased, together with a house.

The Monastery was consecrated on June 19, 1994, on the Feast of the Descent of the Holy Spirit upon the Apostles. Holy Liturgy was served by His Holiness the Serbian Patriarch Pavle together with several bishops of the Serbian Orthodox Church and numerous priests and hieromonks from both Serbia and the diaspora, in the presence of many faithful people. Grace and spiritual beauty were felt by all who came to take part in this unique and great event.

The building endeavors did not stop with the construction of the monastery church, bell-tower and konak. Soon a pavilion was added to the complex. The house that had been bought along with the property was renovated and an extension was built. A few years later a bookstore was built near the church but later moved to Biljana’s house. It boasts a great number of Orthodox books, manuals, prayer books, magazines and other publications in both English and Serbian, as well as candles, incense, icons and other religious items.

By the decision of the Assembly of Bishops of the Serbian Orthodox Church, the Monastery of the Nativity of the Mother of God had the status of a Stavropegic monastery for many years, which means that it fell under the direct jurisdiction and the spiritual guidance of the Serbian Patriarch. The monastery has been under the jurisdiction of Bishop Longin of New Gracanica – Midwest America since 2011.

Prayers for the health and salvation of the living as well as for the repose of the dead are offered up in the private prayers of the sisters, every day, as well as during Liturgies. Liturgies are served every Sunday and every holiday.

The Church has always played a very important role in the life of the Serbian people. The Serbian land is full of monasteries in which the pious can find peace, comfort and answers to many of life’s questions, as well as the strength to withstand temptations. By the Grace of God, Serbs and all other Orthodox Christians living in the US and Canada now also have a spiritual oasis. The sisterhood of the Monastery of the Nativity of the Mother of God invites all Orthodox Christians to visit this holy place and to partake in the grace and spiritual peace that is given to those who sincerely search for it with faith.