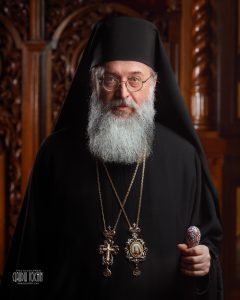 His Grace Bishop Longin of New Gracanica and Midwest America was born on September 29, 1955 as Momir Krco in the town of Kruscanje Olovo. His parents were Stanoje and Andja Jovanovic. He attended grade school in Olovske Luke from 1962 to 1970. He entered Three Hierarchs Seminary in Monastery Krka in 1970 and graduated in 1975.

He entered the Moscow Theological Academy in 1975 where he graduated in 1979. From October 1980 to April 1981, he served in the Diocese of Zvornik-Tuzla as secretary of the Executive Board. He was also administrator of two parishes. On the decision of the Holy Synod of Bishops he was appointed as lecturer of the Holy Three Hierarchs Seminary in 1983 for two years.

At the Sabor of May 1985 he was elected Vicar Bishop of Morava to the Patriarch. He was consecrated on October 20, 1985. His Holiness served the Divine Liturgy along with Metropolitan Vladimir of Rostov and Novo Cerkay (now Metropolitan of Kiev) who had been Dean of the Moscow Theological Academy while Bishop Longin was a student. Also serving were Bishop Nikolaj of Dalmatia, who had been Dean at the Seminary in Krka Monastery where the young Bishop had begun his theological education; and Bishop Vasilije of Zvornik-Tuzla.

Present at the services were the following bishops of the Serbian Church: Metropolitan Vladislav of Dabro-Bosna, Metropolitan Jovan of Zagreb and Ljubljana, Bishop Chrysostom of Branicevo, Bishop Pavle of Ras and Prizren, Bishop Stefan of Zica and Bishop Jefrem of Banja Luka. As guests present were the Archimandrite Platon, professor of the Moscow Theological Academy, Canon Dr. Colin Hikling, professor of Holy Scriptures at the London University, where the new bishop had done post graduate studies. In May of 1986 he was elected Bishop of Australia and New Zealand, where he spent six and a half years. Besides serving the great territory of Australia he also built churches and was involved in work with the youth. Bishop Longin was known especially as a fighter for unity of the Serbian Church.

At the Sabor in 1992 at the request of His Holiness and brother hierarchs, Bishop Longin accepted the duty of being bishop of Dalmatia. He was not able to enter his residence in Sibenik, but had to reside in Monastery Krka, where he lectured at the seminary. With the blessing of His Holiness Patriarch Pavle, he journeyed to Canada and Australia where he collected donations for the suffering Serbian people. After the tragic occurrences in August of 1995, Bishop Longin and the entire seminary from Monastery Krka stayed at Divcibare near Valjevo. At the same time he helped Bishop Lavrentije of Sabac-Valjevo in diocesan matters. Along with Bishop Nikanor of Gornji Karlovac, he worked with refugees, visited the camps and delivered help which had been sent mainly by the Serbs in the Diaspora.

He was enthroned in New Gracanica on October 14, 1999 on behalf of His Holiness Patriarch Pavle and the Holy Synod, by His Eminence Metropolitan Amphilohije of Montenegro and the Coastlands.